Donald Trump Jr.’s Latest Dig at Obama Backfires When the Facts Come Out

Department of Labor Secretary R. Alexander Acosta tweeted out a report of GDP growth of 4.1 percent on Friday. Trump Jr. replied that “just because Obama never broke 2% doesn’t mean that someone with great policies can’t.”

Incredible numbers. I remember when “the experts” laughed about breaking 3%. Just because Obama never broke 2% doesn’t mean that someone with great policies can’t. Let’s keep this going.

4.1% GDP growth in the second quarter. @POTUS has America’s economy firing on all cylinders. 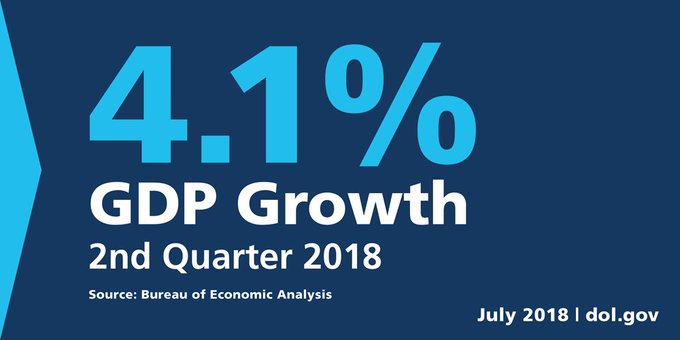 strong 4.1% growth under Trump in Q2 of 2018 would rank as 5th strongest Q of Obama presidency

In addition to the four quarters reporting higher than the most recent one, GDP soared over 2 percent an additional 11 times under the Obama administration, according to The Hill.

Right after his misleading tweet, Trump Jr. then retweeted a call for media to “correct” reporting of economists predicting GDP growth wouldn’t reach over 3 percent under the Trump administration: 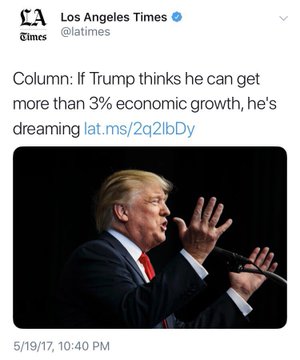 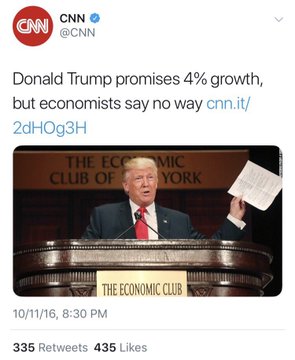 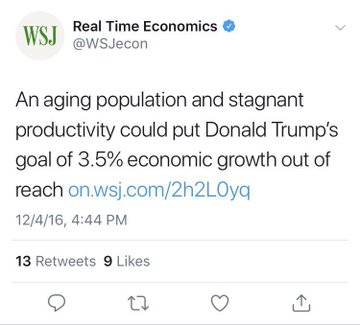 Will any economists be fired for being so wrong? Will media correct?

Despite dozens of replies on the tweet and media reporting the falsity, Trump Jr. has left the statement on his Twitter, gathering over 10,000 retweets and 31,000 likes.

This graph from Trading Economics shows the ups and downs of the GDP growth rate since 2008:

The latest quarter report is good news for President Trump, as it’s the highest GDP growth under his presidency so far. However, the highest growth rate in recent history occurred in 2014.

The president is hopeful he will surpass the numbers Obama put out. He told reporters at a White House speech Friday that “we’re on track to hit the highest annual average growth rate in over 13 years.”