bY BONNIE FULLER//Donald Trump used the excuse of bone spurs in his heels to avoid being drafted into the Vietnam War. The late John McCain volunteered to go and spent years being tortured as a POW. One was a patriotic American hero. The other is small and mean. Ask yourself this: could the current president of the United States possibly survive five and a half years of beatings and torture in a dirty, dark cell in a Vietnamese prison? Could the man in the Oval Office who constantly brags about himself and is trying to tear down the American rule of law to protect himself from Robert Mueller’s investigation, ever put the lives and well-being of others first? John McCain did. After he joined the Navy and was shot down and captured by the Vietnamese in 1967, he refused a unique offer of release from his hellish prison after a year of incarceration, because his father was the commander of U.S. Forces in the Pacific.

McCain, despite his dire circumstances, was so selfless that he refused this special treatment, until all the other American prisoners of war, who had been captured before him, were released first. Can you imagine Donald Trump, ever behaving this way? Based solely on his Vietnam service and honorable behavior during imprisonment, John McCain, was a true, patriotic American hero. In contrast, Donald Trump, instead of ever being imprisoned, has locked up and continues to lock up little migrant children and babies, who he has separated from their parents.

Now, even after John McCain has passed away at 81, after a hard fought battle against brain cancer, Donald Trump has continued to diss the long serving Republican Senator. Trump first mocked John McCain, when he was on the Presidential campaign trail saying: “He’s not a war hero. He was a war hero because he was captured. I like people who weren’t captured”. This, from the man who sat out the Vietnam War playing football, tennis and squash.

That initial Trump attack was set off by John McCain, who had long supported comprehensive immigration reform, slamming Trump’s campaign attacks on Mexicans as ‘rapists’ and ‘criminals’, and his demand to build a wall along the Mexican border. McCain, denounced Trump’s bigoted insults and wall plan for “firing up the crazies”. The feud escalated throughout Trump’s presidency. Despite McCain’s 36 years of service representing Arizona in the House of Representatives and then in the Senate, vindictive Donald Trump, repeatedly mocked the Senator as he battled for his life in the past year. He couldn’t get over his fury with McCain for casting the decisive “NO” vote, against killing Obamacare.

McCain refused to take healthcare away from millions and the President has been enraged ever since.Trump, childishly mocked McCain’s infamous “thumbs down” sign on the Obamacare repeal, at multiple rallies of his loyal supporters. After McCain’s sad death on Aug. 25th, heartless Trump refused to issue a  “presidential” statement honoring the accomplishments of this dedicated public servant, despite the pleas of the White House aides, according to The Washington Post, instead posting a terse tweet.

“My deepest sympathies and respect go out to the family of Senator John McCain. Our hearts and prayers are with you,” he wrote. Basically, the standard tweet he has used for the multiple, multiple victims of mass shootings since he has taken office. Just contrast that with the genuine words of respect and admiration from his political rival, President Barack Obama:

“John McCain and I were members of different generations, came from completely different backgrounds, and competed at the highest level of politics. But we shared, for all our differences, a fidelity to something higher – the ideals for which generations of Americans and immigrants alike have fought, marched, and sacrificed. We saw our political battles, even, as a privilege, something noble, an opportunity to serve as stewards of those high ideals at home, and to advance them around the world. We saw this country as a place where anything is possible – and citizenship as our patriotic obligation to ensure it forever remains that way.

Few of us have been tested the way John once was, or required to show the kind of courage that he did. But all of us can aspire to the courage to put the greater good above our own. At John’s best, he showed us what that means. And for that, we are all in his debt. Michelle and I send our most heartfelt condolences to Cindy and their family.”

Then Trump layered on more personal pettiness by only lowering the flag at the White House for a mere 24 hours, despite the longtime tradition of keeping the White House flag at half mast until sitting Senators are buried. Only after massive public outrage including from multiple veteran groups, did Trump finally re-lower the flag late on the afternoon of Aug 27th and issue a statement that he was doing it “as a mark of respect for the memory and long standing service of Senator John Sidney McCain III”. How big of him, after his arm was virtually twisted. 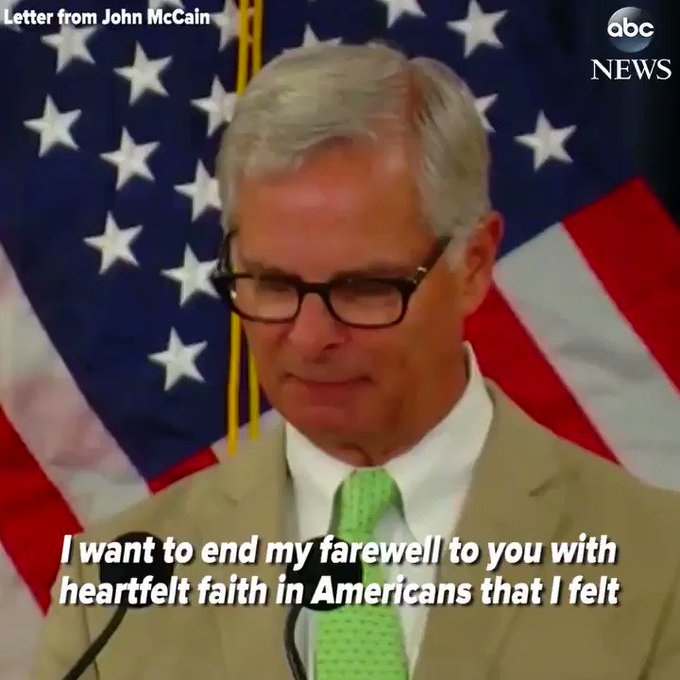 Now, let’s just contrast Trump’s mean-spiritedness and cowardice with John McCain’s courage even after his death. The Senator wrote a letter before he passed away, which was made public today, Aug. 27, in which he condemns Trump’s destructive efforts to divide Americans and to tear us apart from our allies. “We weaken our greatness when we confuse our patriotism with tribal rivalries that have sown resentment and hatred and violence in all the corners of the globe,” he wrote. “We weaken it when we hide behind walls rather than tear them down, when we doubt the power of our ideals rather than trust them to be the great force for change they have always been”.

One man almost gave up his life in service of American values and greatness. Then devoted the rest of it to truly trying to make a America a greater place for all Americans, despite their races and backgrounds. The other man, has a MAGA slogan, but has spent his time in power trying to bully all who stand up to him while he supports white supremacists, cozies up to dictators like Vladimir Putin and urges his base to despise the mainstream media and every democratic voter.

Just who is the true American patriot?