Baby Sussex made his global debut on Wednesday. And though Camilla, Duchess of Cornwall was far away in Germany, she still was able to see a shot of the newborn royal.

Camilla, 71, was shown a photo of the sleeping newborn, Hello! reported, during a visit to Saint Thomas Church in Leipzig — one of the many spots she and Prince Charles are visiting during their three-day trip to the country, which began on Tuesday.

Her response was just as prim and proper as one would expect from a royal.

“Thank you for showing this to me,” she said, according to Hello!

Camilla was also gifted an oversized teddy bear for the baby from someone in the crowd.

She and Charles will continue traveling Germany through Thursday with a stop scheduled in Munich. The pair already met with German Chancellor Angela Merkel on Tuesday, while visiting Berlin.

While in Berlin, Camilla and Charles gushed about the birth of their grandson (and Prince Harry and Meghan Markle‘s first child).

“We couldn’t be more delighted at the news, and we’re looking forward to meeting the baby when we return,” Charles said, Tuesday. 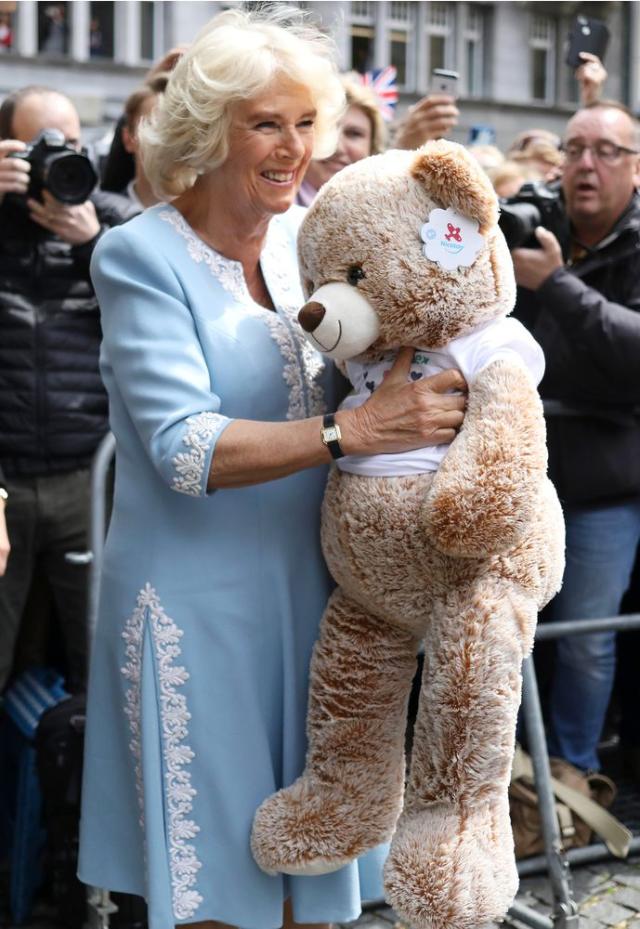 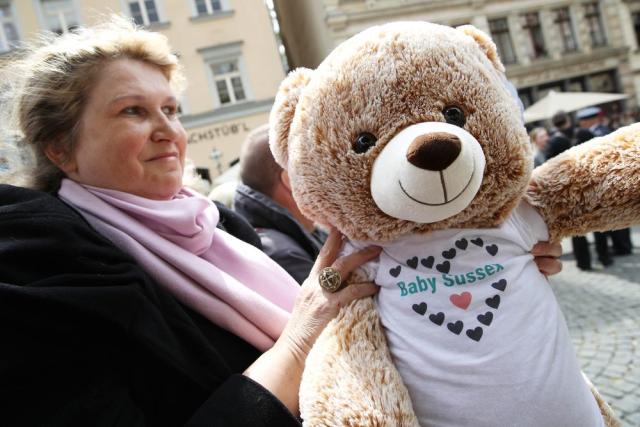 The rest of the royal family have all sent their love, too.

Queen Elizabeth, great-grandmother to the newborn, added her welcome to the newest member of the family in a statement from Buckingham Palace on Monday, adding that she was “delighted with the news.”

Prince William and Kate Middleton also had sweet things to say about their new nephew on Tuesday.

William said he was “absolutely thrilled” for his brother and sister-in-law, adding he was “looking forward to seeing them in the next few days when things have quieted down.”

“I’m very pleased and glad to welcome my brother to the sleep deprivation society that is parenting!” he joked.

Kate reflected on what it’s like to be a new parent. “It’s really exciting for both of them,” she told reporters on Tuesday. “These next few weeks, it’s always very daunting first time around so wish them all the best.”

The mother of three added that she’s experienced with having children this time of year (Prince Louis was born last year on April 23, while Princess Charlotte celebrated her fourth birthday on May 2).

“It’s such a special time – with Louis and Charlotte just having had their birthdays. It’s such a great time of the year to have a baby. Spring’s in the air, so it’s really great,” she said. “As William said, look forward to meeting him and finding out what his name’s going to be.” 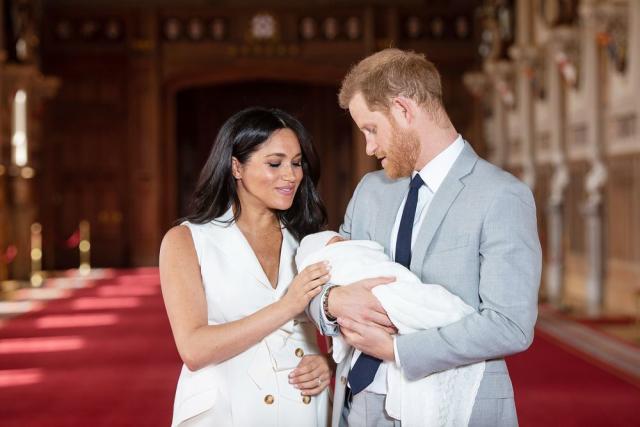 Megan and Harry introduced their first child Wednesday at St. George’s Hall in Windsor Castle (where they had their royal wedding reception!), just two days after welcoming the new addition to royal family.

Wearing a white sleeveless dress, Meghan was glowing as she stood behind Harry, who held their newborn son in his arms.

RELATED: See the First Photos of Meghan Markle and Prince Harry with Their Royal Baby!

Asked what it’s like being a new mom, Meghan said: “It’s magic. It’s pretty amazing. I have the best two guys in the world, so I’m really happy.”

She went on to say that Baby Sussex “has the sweetest temperament. He’s really calm.”

Harry then added, “I don’t know where he gets that from!”

“He’s just been a dream,” Meghan said. “It’s been a special couple of days.”