Gerry Adams has revealed plans to publish a cookery book based on recipes used by Sinn Féin negotiators during the peace talks of 1998.

The former Sinn Féin president, who handed over to Mary Lou McDonald earlier this year, opted against issuing a post-retirement memoir – although he has plenty already – and instead turned to culinary advice.

The Negotiators’ Cook Book is expected to be published in time for Christmas.

Mr Adams revealed the existence of the forthcoming book on Monday and said it contained recipes with “some of the best-kept secrets” of the Good Friday Agreement talks.

‘The British never fed us’

He claimed that “the British” had failed to provide food and that Sinn Féin’s delegates at the talks which delivered lasting peace to Northern Ireland had had to fend for themselves.

“The British never fed us. They never had any food,” he said.

“But as intrepid republicans and being blessed by one or two great cooks these are the recipes that sustained the Irish negotiating team.

“It contains some of the best-kept secrets of the Irish peace process.”

It’s not clear yet what sorts of recipes the book will contain, although Mr Adams did tweet a picture of a mocked up front cover featuring a pot – and a slice of cake. 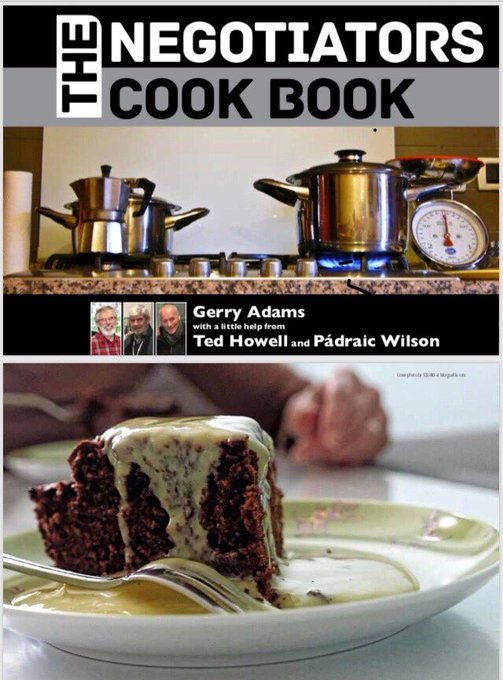 Not 2 Long 2 Christmas. A Wee Taste Of A Great Stocking Filler From Ted & Pádraic agus Mise.

He has written the book along with Ted Howell and Pádraic Wilson, two long-term associates.

The republican leader will also be releasing a book of short stories next year and said he prefers to write fiction over non-fiction, despite a series of autobiographies and historical books published in the past.

Despite stepping down from his decades-long leadership of Sinn Féin, which began long before the IRA halted its campaign of violence, Mr Adams remains as a member of the Dáil in Ireland