JEREMY CORBYN’S LIVERPOOL Labour Conference ‘Take Away’, BREXIT – Plus What Are You Doing in November? Prime Minister May Snap Election Speculation …

AIWA! NO!)As Labour conference got underway in Liverpool on Sunday morning, it was already shaping up to be another dramatic day in the world of UK politics.

Downing Street was forced to deny an early general election was a likely prospect amid a flurry of reports that senior No 10 officials were “wargaming” a November poll and Labour was preparing to table a vote of no confidence in Theresa May.

It followed a turbulent week in which the EU rejected the Prime Minister’s Chequers plan and May gave defiant response in which she demanded respect from Brussels.

Jeremy Corbyn, meanwhile, has confirmed that the Labour Party could make the controversial decision to back a re-run of the Brexit referendum should party delegates back the idea.

Here is a complete run-down of what happened in the Sunday politics shows.

First up to speak to Sky’s Sophy Ridge was a panel which included Labour MPs Lisa Nandy and Alison McGovern.

As Labour looks likely to change its rules and introduce a co-deputy leader who will be a woman, Nandy said Labour should also consider a joint leadership with a man and woman holding the post in a job-share arrangement.

Nandy said, given Labour had never had a female leader, she would like to see Labour go further and follow the example of the Greens in electing a joint male-female co-leadership team.

“I don’t really think this is enough,” the Wigan MP told Sky News. “I really welcome this announcement from the NEC today, I think it’s absolutely essential that we have got a woman somewhere near the top of the party.

“But I don’t think that should stop at deputy leader. I think we should have this sort of system for leader as well.

The decision by the party’s ruling National Executive Committee prompted speculation over female MPs like Emily Thornberry, Angela Rayner or Rebecca Long-Bailey seeking the deputy post as a springboard for an eventual bid for the leadership. 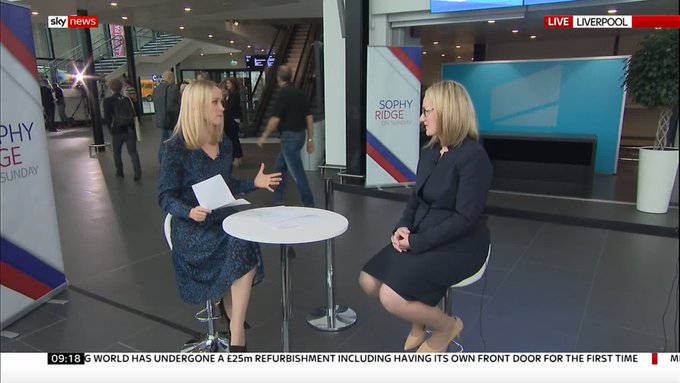 Shadow Business Secretary @RLong_Bailey says Labour would “of course respect” a second referendum on #Brexit if Labour members at conference called for one.

But adds that she has “reservations”#Ridge

Shadow business secretary Long-Bailey insisted she had “not even thought about” running for the proposed new deputy role.

“I honestly haven’t thought about it,” she told Ridge, adding: “I’m very busy dealing with business, energy and industrial strategy and I like that very much and I’m sure that’s going to keep me busy for a long time.”

In a separate interview, Long-Bailey, who represents Salford, warned that people would be “concerned” by a second EU referendum after the Labour leadership said they would back a vote if activists at the party’s conference called for it.

She said she wanted an election if Theresa May could not get her Brexit plan through Parliament, but added: “Jeremy (Corbyn) was elected to democratise the Labour Party and, although it’s not our position policy-wise, if members decided at this conference that they wanted to have a People’s Vote or second referendum of course we would respect the membership.”

On Sky News’ Sophy Ridge On Sunday, she said she had “reservations” about another vote because the Government “might be able to skew it in particular directions to secure the result they wanted”.

She would not say another vote would lead to “civil disobedience” – as shadow cabinet colleague Barry Gardiner has suggested – but “people would find it quite concerning and it needs to be looked at very carefully”. 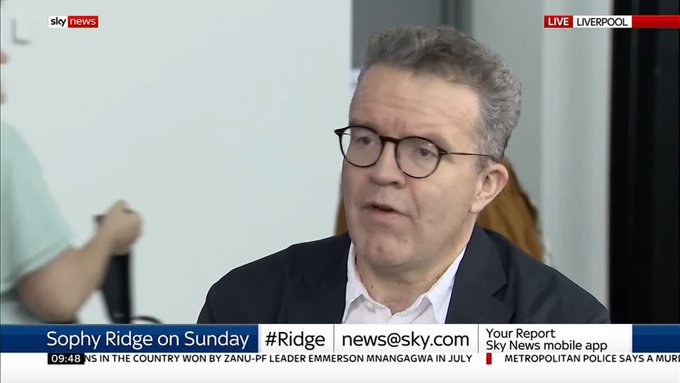 ‘I’d probably vote Remain – but I’d look at what the question is on offer.’@tom_watson is asked how he would vote if there was another #Brexit referendum #Ridge

Next up was deputy Labour leader Tom Watson, who said he would probably vote to remain in the EU if there was a second referendum.

He stressed it was not yet Labour’s policy to hold a second vote: “That is not the view Jeremy and I take, what we have said and still want the conference to support is that there is a meaningful vote in Parliament on the Brexit deal and if we can’t get a meaningful vote then there should be a general election.”

Asked if a second vote would be in Labour’s manifesto for the election, he said: “It seems to me inconceivable that if the Labour Party conference decides that it wants a manifesto pledge on a people’s vote that we would defy that decision.”

The Labour heavyweight said he voted to remain in the EU in 2016 and “I think it’s highly likely I would probably vote remain in the next one”.

“But I would look at what the question is on offer and I would want to know what the deal is that comes out of the negotiations, if that happens.”

Watson acknowledged there was “always a danger” that a conference resolution could be a fudge but “when it comes to a second referendum I’m sure there will be words on offer that will allow the party to come to a fixed view on that”. 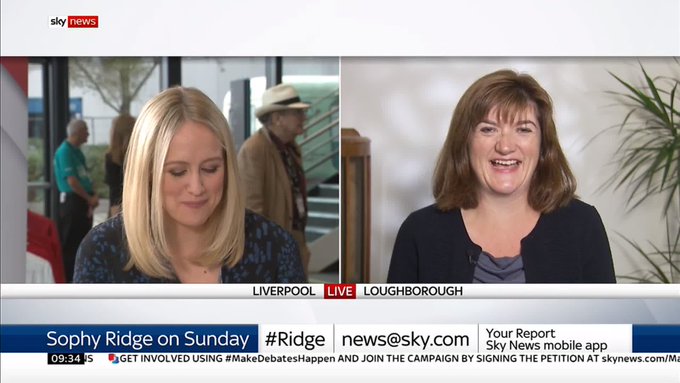 She warned that a leadership challenge to Theresa May would not be in the interests of the Conservative Party or the country.

“Having a leadership election now would not be in the country’s interest. There are particularly a lot of the hard Brexiteers who want to bring the Prime Minister down,” she told Sky News’ Sophy Ridge On Sunday.

“This is not a move that would help the country in order to get to the best position after Brexit which does least damage to the economy. That is what we as Conservatives should be focused on.

“Europe has always been a big faultline in our party. But the majority of the parliamentary party and, I think, the membership want us to focus on getting a good deal that supports the economy and then moving on.” 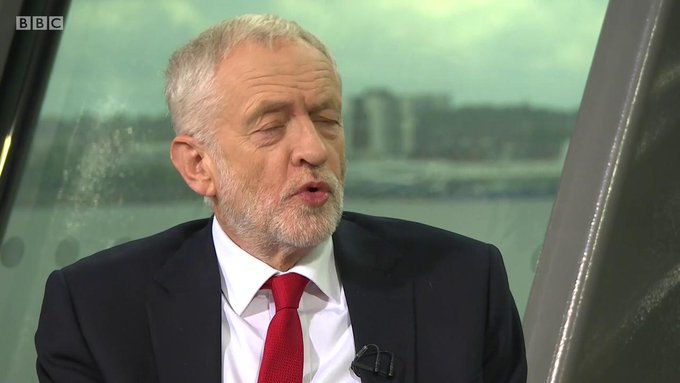 On the idea of a second referendum, @jeremycorbyn says: “Let’s see what comes out of conference and then obviously I am bound by the democracy of our party.” #marr

The BBC One show’s big interview this week was with Labour leader Jeremy Corbyn.

He said his party is “ready to put our case to parliament” and that an early general election “could well” be on the cards.

He also suggested that the Prime Minister’s Chequers plan was being rejected because the Government appears to be “looking in two ways at the same time” – towards America and deregulation and the EU’s higher standards.

Speaking on the BBC’s Andrew Marr Show, the Labour leader also said a re-run of the Brexit referendum could make the manifesto as he would be “bound” by delegates’ vote should they back the idea at the party’s conference in Liverpool this week.

And, after a summer in which Corbyn and his party has been dogged by allegations of anti-semitism, the Labour leader insisted he would “die fighting racism in any form” and hit back at Rabbi Sacks’ comparison of him with Enoch Powell. 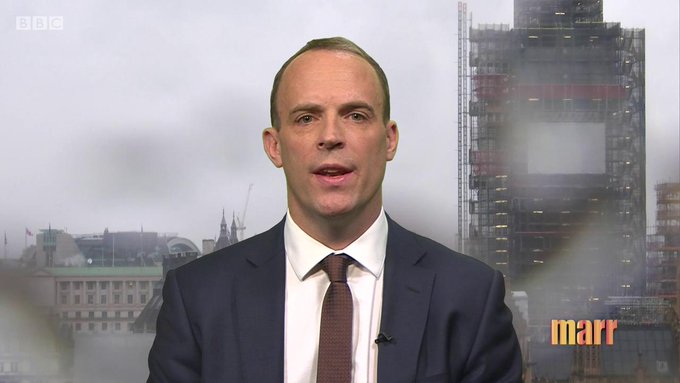 Also appearing on the show was Brexit Secretary Dominic Raab, who said that the government would make progress on Brexit talks.

When asked about the idea of a November general election, he said it was “for the birds” and “not going to happen”.

Raab also insisted Salzburg had been no more than a “bump in the road” in the negotiations.

“We will hold our nerve, we will keep our cool and we will keep negotiating in good faith. What we are not going to do is be dictated to,” he said.

“We have come up with a serious set of proposals. We are not just going to flit from plan to plan like some sort of diplomatic butterfly.

“We are going to be resolute about this and really press the EU to treat us with some respect.”

He said that Britain had shown flexibility in its negotiating position and called on the EU to do the same.

“If we just get this sort of ‘computer says no’ response from the EU we are not going to make progress,” he said.

“We need some flex, some give and take if you like, from the EU and I am confident that, as the fall-out from Salzburg ebbs, we will make further progress.”

Raab said the Government was continuing to prepare for a no-deal break, with the next tranche of technical papers due to be published on Monday.