Meghan Markle’s sister Samantha begs her to let father visit Archie: ‘Being excluded is like a dagger through the heart’

Meghan Markle’s estranged half-sister Samantha has begged the duchess to let the pair’s father visit baby Archie, saying “being excluded is like a dagger through the heart”.

In an interview with The Mirror, Samantha said Thomas Markle was left saddened when the first pictures of Meghan and Prince Harry’s son were revealed to the world last week.

She said she excitedly called him up after the first family pictures were released but that it was “a sad moment for him”.

“He should have been involved,” she said. “Being excluded is like a dagger through his heart.

“And poor Master Archie is not getting to know a creative, loving person.”

Meghan’s mother Doria Ragland was pictured with the royal couple as they introduced Archie to the Queen and Prince Phillip, and Samantha said she wished Ms Ragland had stepped in to make sure Mr Markle was there.

“She could have said ‘get your dad out here’. But sadly there seemed to be a lack of effort,” she said.

Adding that she believed Archie has the “Markle nose”, she continued: “I would like to say congratulations to Meghan on the birth, but also tell her that to have excluded dad is wrong.

“He is a doting granddad and he’s been great with all his other grandkids. He buys toys, plays creative games, he’s funny and nurturing and communicative with them.”

“[Archie] isn’t just a Mountbatten-Windsor child, he’s a Markle too,” she said.

Mr Markle, 74, who has had a tumultuous relationship with Meghan, offered his congratulations to the royal couple on Monday after they announced the birth.

He told The Sun: “I am proud that my new grandson is born into the British royal family and I am sure that he will grow up to serve the crown and the people of Britain with grace, dignity and honour.

“God bless the child and I wish him health and happiness, and my congratulations to my lovely daughter Duchess Meghan and Prince Harry, and God Save the Queen.” 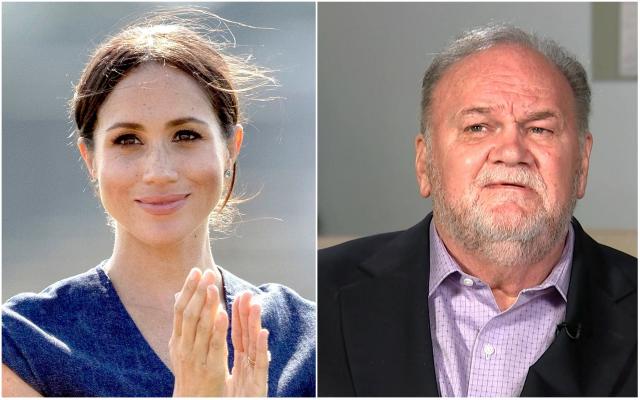 Harry and Meghan’s first child, who is seventh in line to the throne, is Mr Markle’s sixth grandchild.

The former Hollywood lighting director has reportedly not spoken to the Duchess of Sussex since just after the royal wedding last May, which he did not attend due to his health.