As the birthplace of Muhammad, and the site of Muhammad’s first revelation of the Quran (specifically, a cave 3 km (2 mi) from Mecca), Mecca is regarded as the holiest city in the religion of Islam and a pilgrimage to it known as the Hajj is obligatory for all able Muslims. Mecca is home to the Kaaba, by majority description Islam’s holiest site, as well as being the direction of Muslim prayer. 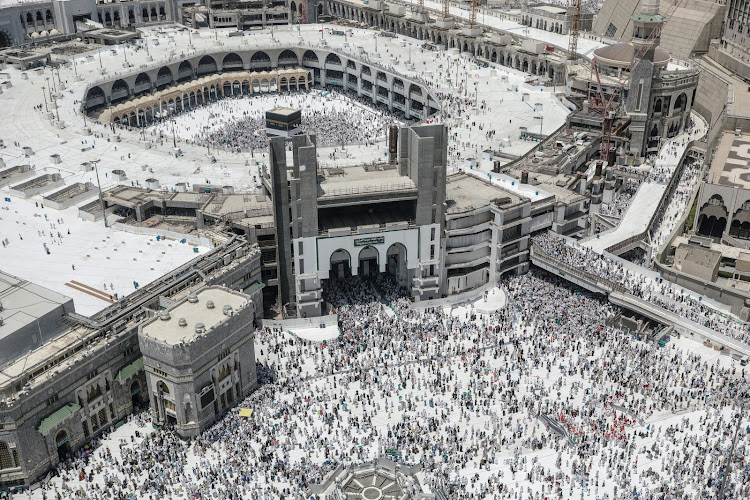 Muslim pilgrims walk out after the Friday prayer at the Grand mosque ahead of annual Hajj pilgrimage in the holy city of Mecca, Saudi Arabia August 17, 2018.
Image: REUTERS/Zohra Bensemra TPX IMAGES OF THE DAY

bY CRIMSON TAZVINZWA//Hisham Mostafa briefly forgot the war in Syria and his financial worries as he looked upon Islam’s holiest sites for the first time, standing among hundreds of thousands of white-clad Muslims gathered in Mecca ahead of the hajj pilgrimage.

“This is the first time I see the Grand Mosque and the Kaaba. It is the best feeling of my life to be able to perform the hajj,” said Mostafa, 50, as he looked at the cube-shaped structure towards which Muslims turn in prayer five times a day.

The accountant traveled to Saudi Arabia from Turkey where he has lived for five years since fleeing Aleppo in Syria. “War destroys everything … Life in Turkey is hard and I barely earn enough.”

But he was able to join about 2 million Muslims, including 1.68 million from abroad, flooding Mecca’s narrow streets for the annual rite which starts on Sunday.

Nayef Ahmed, 37, told Reuters that in order to afford the hajj he had to sell a plot of land in Yemen, which is embroiled in a three-year proxy war between Saudi Arabia and Iran.

“Because of the war the prices are very high. But being here I feel comfort and peace and I pray to God for the war to end.”

Two Arab Israelis went on trial in Saudi Arabia on Monday for allegedly plotting an attack during the Muslim hajj pilgrimage, according to the charge.

Saudi Arabia stakes its reputation on its guardianship of Islam’s holiest sites and organising a peaceful hajj, which has been marred in the past by deadly stampedes, fires and riots.

The interior ministry has put in place measures to confront any security threat from militant attacks to political protests, but no specific threats have been detected, a spokesman said.

“We will prevent any actions that are not part of the hajj ritual and any act that may impact the safety of pilgrims or their ability to perform the rite,” Interior Ministry spokesman Mansour Turki told Reuters.

Every able-bodied Muslim who has the means should perform the hajj at least once in their lifetime under a quota system.

“I came for umrah (minor pilgrimage) in 2007 and today after 10 years of registering and waiting, I am here,” said Najwa, 59, from Tunisia. “I cannot describe the feeling. I cry every day.”

The hajj itinerary retraces the route Prophet Mohammad took 14 centuries ago. Saudi Arabia has made use of technology to manage the flow of millions at the same place at the same time.

This includes electronic identification bracelets, connected to GPS, that were introduced after a 2015 crush killed hundreds.

“There is a comprehensive electronic agenda for every pilgrim and we have provided many apps that offer guidance,” Minister of Hajj and Umrah Mohammed Bintin told Reuters.

“We have a fleet of more than 18,000 buses, all of them linked to a control system that tracks their path.”

He said a high speed railway between Mecca and Medina had been completed and was being now being tested.

Pilgrimage is the backbone of a plan to expand tourism under a drive to diversify the kingdom’s economy away from oil. The hajj and year-round umrah generate billions of dollars in revenues from worshippers’ lodging, transport, fees and gifts.

Officials aim to increase the number of umrah and hajj pilgrims to 15 million and 5 million respectively by 2020, and hope to double the umrah number again to 30 million by 2030.