The 500-mile-wide hurricane, which is barreling toward the US east coast, is expected to make landfall on Thursday night, but then the storm’s movement will slow to a crawl, meaning that some coastal areas will get as much as 24 hours of battering winds and rain.

More than 1.4 million people across North and South Carolina have been ordered to evacuate as President Donald Trump vowed the federal government was “ready for the big one”.

Hurricane Florence will be the first Category 4 storm to make a direct hit on North Carolina in more than 50 years and with sustained winds of 130mph, it’s already pushing a storm surge and rain ahead of it.

NASA shared an image of the giant storm two days ago. 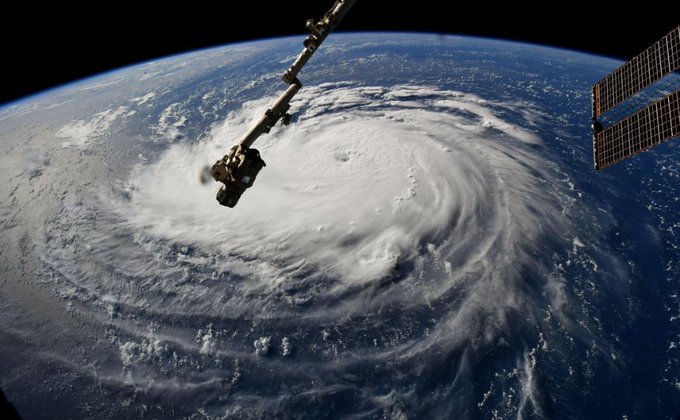 Earlier this morning, @Astro_Ricky Arnold shared this view, saying “Hurricane #Florence this morning as seen from @Space_Station.” Our @NASAEarth-observing satellites also continue to monitor this storm as it has developed an eye + strengthened: https://go.nasa.gov/2CRI4ob

But on Wednesday, a high definition camera outside the International Space Station captured a detailed and sobering view of Hurricane Florence from above.

“This will likely be the storm of a lifetime for portions of the Carolina coast, and that’s saying a lot given the impacts we’ve seen from Hurricanes Diana, Hugo, Fran, Bonnie, Floyd and Matthew,” the National Weather Service in Wilmington, North Carolina, said on Tuesday.