“DROP THAT GUN! PETA offers $100,000 carrot to @NRA in exchange for animal-friendly reforms …

PEOPLE FOR THE ETHICAL TREATMENT of Animals (PETA) is making an unlikely offer of $100,000 to the National Rifle Association (NRA) if the financially troubled gun rights organization bans animal trophy hunters including President Donald Trump’s sons Donald Trump Jr. and Eric Trump from its membership.

PETA President Ingrid Newkirk made the donation offer to the NRA, which stated it may soon “be unable to exist,” in a letter to its Executive Vice President Wayne LaPierre on Tuesday. In addition to her letter’s terms to deny memberships to trophy hunters and stop promoting assault weapons for hunting, Newkirk tweeted that the NRA should kick out “gormless pathetic twits” and posted a photo of Trump’s sons with a leopard they apparently killed during a 2011 African safari trip. 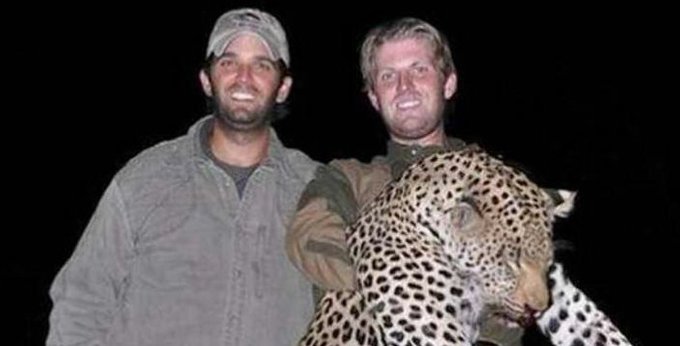 “The Trump sons, they’re poster children for the decimation of wildlife overseas,” Newkirk told Newsweek on Wednesday, adding that the NRA should not stick up for people with such “absolutely indefensible behavior.”

PETA’s offer came days after the NRA, which has sued New York Governor Andrew Cuomo and financial regulators, warned in a court filing that it has lost insurance coverage which could jeopardize its day-to-day operations.

“To help your floundering organization get out from under the gun and come closer to today’s ideals, we would be willing to help you if you reject as members those who engage in the cruel practice of hunting wild animals,” Newkirk wrote in her letter.

Newkirk admitted that PETA’s donation offer to the NRA, of all organizations, is “completely unexpected, but it’s pragmatic.”

“I know that the majority of people in this country and overseas are horrified by trophy hunting and the decimation of wildlife generally, and if the NRA wishes to defend people’s rights to have firearms in their homes to prevent invasion, we’re not going there,” she explained.