With opinion polls showing dozens of tight U.S. congressional and gubernatorial races in Tuesday’s election, the current and former presidents said the results would determine what kind of country Americans live in for the next two years.

President Donald Trump and former President Barack Obama traded blow after blow as they crossed the country in the final weekend of campaigning before Tuesday’s midterm elections.

“This election will decide whether we build on this extraordinary prosperity we have created,” Trump told a cheering crowd in Macon, Georgia, warning that Democrats would “take a giant wrecking ball to our economy.”

Trump campaigned with Georgia Secretary of State Brian Kemp, who is in a tight race with Democrat Stacey Abrams for the governor’s office.

Obama condemned Trump, without addressing him by name, and Republicans for what he described as their divisive policies and repeated lies. He hammered Trump and Republicans for repeatedly trying to repeal his signature healthcare law while at the same time claiming to support the law’s protections for those with pre-existing conditions.

“The only check right now on the behavior of these Republicans is you and your vote,” Obama told supporters in Gary, Indiana, during a rally for endangered Democratic Senator Joe Donnelly.

“The character of our country is on the ballot,” he said. 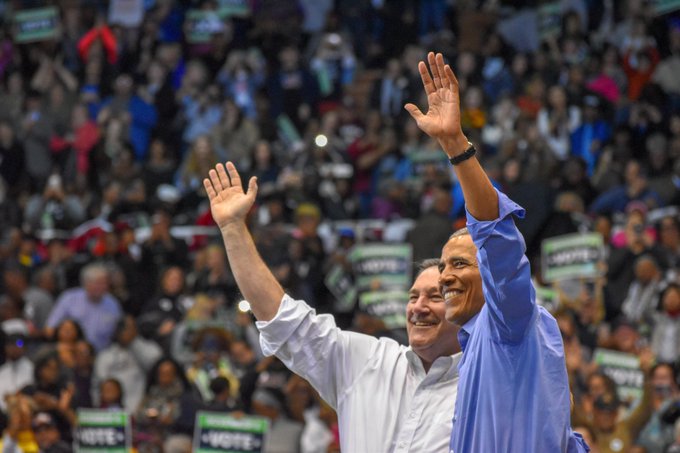 US Senate candidate, IN

Your vote is your voice. Thank you to my friend @BarackObama for rallying Hoosiers to vote today. Let’s win this.http://GetToThePolls.com

Trump and Obama are the most popular figures in their parties, and their appearances on the campaign trail are designed to stoke enthusiasm among core supporters in the late stages of a midterm congressional election widely seen as a referendum on Trump’s first two years in the White House.