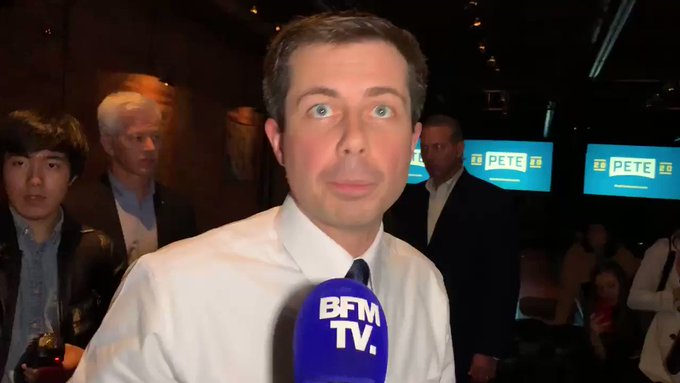 Quipped one fan: “Why is there even an election for goodness sake. Just give him the damn job and I’m Canadian ”

The 37-year-old Indiana mayor — a graduate of Harvard and Oxford universities, Rhodes Scholar, Afghanistan veteran and musician — sent social media ablaze Monday night when he delivered a touching message to the people of France in the wake of the Notre Dame blaze — in fluent French.

English and French are just two of seven languages that Buttigieg speaks.

“To the people of France, I would like to say that Notre Dame cathedral was like a gift to the human species,” the Democrat told a reporter from the French station BFM TV at a fundraiser in Williamsburg, Brooklyn.

“We share the pain, but we also thank you for this gift to civilization.”

Video of his message went viral as social media users fawned over his talents and hailed the mayor of South Bend as the next president.

By Tuesday afternoon, the clip had 3.3 million views.

“I’m crushing pretty hard on #PeteButtigieg2020 right now,” one Twitter user wrote less than a day after Buttigieg announced his candidacy for president.

Another added, “This guy keeps getting better and better.”

Quipped one fan: “Why is there even an election for goodness sake. Just give him the damn job and I’m Canadian.”

“The View” co-host Ana Navarro-Cardenas added, “Today, I saw a video clip of @PeteButtigieg playing classical piano. Another was (sic) he speaks in Spanish. And this one, was (sic) he tells Parisians, he shares their pain — in French. Just imagine having a President whose intellect exceeds that of a root vegetable … for a change.”

While Buttigieg is enjoying his time in the sun, an Emerson poll released Monday put him in third place in a national poll of 2020 contenders, behind Bernie Sanders and Joe Biden, respectively.

Buttigieg is a devout Christian who is openly gay and married partner Chasten Glezman last year.