The White House chief of staff John Kelly repeatedly told aides President Trump was an idiot and they were all living in “Crazytown”, according to a new book by veteran reporter Bob Woodward.

OPINION: If you take seriously the revelations in Bob Woodward’s book Fear – and how can you not, given Woodward’s nearly half-century of scoops about Washington’s elite? – then it’s time for US President Donald Trump to be removed from office via the 25th Amendment because he is clearly “unable to discharge the powers and duties of his office”.

That will never happen, because the Cabinet is packed with Trump toadies who compete with each other to deliver the most fawning praise of their supreme leader. But on the merits, it should happen.

Of course, it doesn’t take Woodward’s revelations to demonstrate Trump’s unfitness for office. Trump demonstrates it on a daily basis with his campaign-rally rants and Twitter tirades.

The craziest Republicans are those who keep US President Donald Trump in office, Max Boot writes.

Just in the past day, the president has demanded that the Justice Department drop criminal investigations against his supporters because it could cost Republicans House seats, and suggested that NBC lose its broadcast license because, in essence, he objects to the criticism he receives on MSNBC.
READ MORE:
* Book reveals a ‘nervous breakdown’ of Trump’s presidency
* White House strikes back over Fear
* Bob Woodward’s talk with Trump
* Donald Trump praises Rob Porter, accused of domestic violence
* US President Donald Trump on the rampage
* For some diplomats, the Trump White House is a troubling enigma
* Feuding Trump aides told to end ‘palace intrigue’: source

A senior Justice Department official told Axios: “It shows how POTUS [President of the United States] thinks DOJ [the Department of Justice] should be used: as a weapon against enemies and a tool to win elections.” In a normal world – a world where Congress was not controlled by blind Republican partisans – the fact that Trump continues to make demands so at odds with the rule of law would be cause for his impeachment and removal.

But even if Woodward doesn’t break ground in conceptual terms, he does provide damning new evidence to buttress what we already know – that after more than 18 months in office, Trump is just as unqualified as ever to be president. Even Republicans know it. They just choose to deny it, because it would be too dangerous to their political well-being to admit reality.

Some of what Woodward reports has long been rumoured in Washington, but he appears to have nailed down the evidence showing that Trump had to be talked out of pulling US troops out of South Korea and Afghanistan, planning a preventive strike against North Korea, assassinating Bashar al Assad of Syria, and tearing up the North American Free Trade Agreement and the US-Korea Free Trade Agreement. Aides had to resort to sleight of hand to prevent the worst from happening – including removing papers from Trump’s desk before he signed them.

Woodward also reveals a new example of Trump’s dim-wittedness: The president apparently thought that Senator John McCain had “been a coward for taking early release from a prisoner-of-war camp in Vietnam because of his father’s military rank and leaving others behind”. Maybe Trump genuinely thought McCain wasn’t a hero because he had no understanding of what McCain had done? Defense Secretary Jim Mattis had to gently explain to Trump that “you’ve got it reversed”.

Little wonder that Woodward quotes Mattis telling associates “that the president acted like – and had the understanding of – ‘a fifth- or sixth-grader'”. Or that Chief of Staff John Kelly reportedly said of Trump: “He’s an idiot. It’s pointless to try to convince him of anything. He’s gone off the rails. We’re in Crazytown.” There is also ample evidence to buttress economic adviser Gary Cohn’s conclusion that Trump is a “professional liar”. Trump even lied in a telephone conversation with Woodward, denying any knowledge that the veteran reporter wanted to interview him before admitting that Senator Lindsey Graham, Republican-South Carolina, had relayed the request. 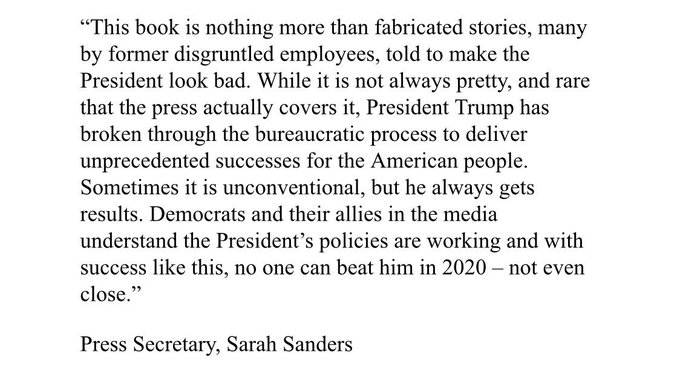 The Woodward book has already been refuted and discredited by General (Secretary of Defense) James Mattis and General (Chief of Staff) John Kelly. Their quotes were made up frauds, a con on the public. Likewise other stories and quotes. Woodward is a Dem operative? Notice timing?

The already discredited Woodward book, so many lies and phony sources, has me calling Jeff Sessions “mentally retarded” and “a dumb southerner.” I said NEITHER, never used those terms on anyone, including Jeff, and being a southerner is a GREAT thing. He made this up to divide!

Trump, in turn, belittles his senior aides in ways that would be shocking coming from anybody else. He made fun of retired Lieutenant General H.R. McMaster, a war hero, for dressing in cheap suits “like a beer salesman”. If only McMaster had devoted his life to selling real estate rather than protecting our nation, he would presumably have more of a suit-buying budget. And, not surprisingly, Trump was even more scathing about Attorney General Jeff Sessions in private than he is public. Acting just like the coastal elites he so often denigrates (but actually envies), Trump mocked Sessions’ accent and said: “This guy is mentally retarded. He’s this dumb Southerner. … He couldn’t even be a one-person country lawyer down in Alabama.”

Imagine the outcry among Republicans if Hillary Clinton or Barack Obama had been caught making fun of Sessions’ accent and intelligence. But from Republicans all you hear is the sound of silence.

These revelations will be greeted among Republicans not as a sign of Trump’s unfitness for office – which they are – but as more evidence of a conspiracy among the “fake news media” against their electoral hero. That is the genius of Trump’s attacks on the press and on truth itself: He has largely inoculated his base against all of the damaging revelations that continue to emerge about the most corrupt and dysfunctional administration in US history. And by keeping the support of his base (78 per cent of Republicans approve of him in a recent Washington Post-ABC News poll), Trump protects himself from removal either via the 25th Amendment or the Article II impeachment process.

Kelly is right. We really are in Crazytown. But Trump is far from the craziest person in town. His defects are no secret – they were obvious before his election. The really crazy people are the Republicans who think we should continue to entrust a man manifestly unfit to be Queens Borough president with the presidency of the United States of America.

US Attorney General Jeff Sessions was allegedly ridiculed by Trump behind his back: “This guy is mentally retarded. He’s this dumb Southerner. … He couldn’t even be a one-person country lawyer down in Alabama.”