Theresa May Told Her Time Is Up, Got upset 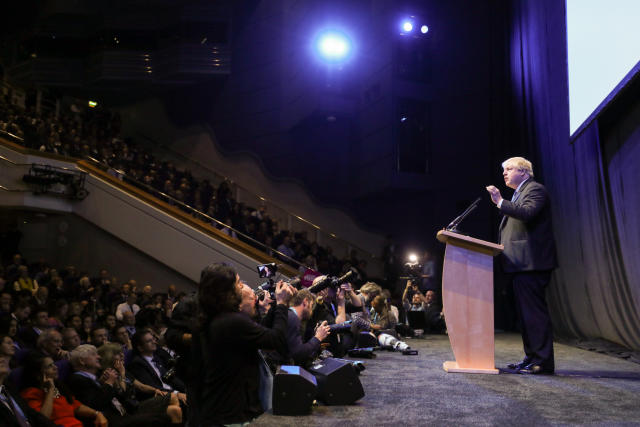 Boris Johnson Is Slim, Trimmed and Ready to Fight for Power

The meeting was tense and at one point Theresa May was visibly upset. But by its conclusion, forced by her own party, she’d agreed to set a timeline to quit as U.K. prime minister.

The premier spent more than an hour in her office behind the Speaker’s chair in the House of Commons, locked in discussions with a panel of the most powerful rank-and-file members of Parliament in her Conservative Party as she sought to buy time for her failing leadership so she could get her Brexit deal approved by the chamber, which has thrice rejected it.

After the rest of the panel — called the 1922 Committee — had filed out, May and its chairman, Graham Brady, hammered out a joint statement. Under the terms, May will try one last time to get the Brexit deal approved in a vote in Parliament at the beginning of June. After that, regardless of the outcome, she’ll meet again with Brady to chart her departure.

With May’s leadership time-limited, contenders to replace her have already begun campaigning. The upheaval in the ruling Tories throws the whole shape of Brexit in the air, as it will pit those who favor a softer Brexit retaining close EU ties against those arguing for a harder split. The pound weakened Thursday as investors brace for more political turmoil and a leadership race that could put an uncompromising Brexit-backer in office.

On Thursday, former Foreign Secretary Boris Johnson, who has been arguing for a harder split from the bloc than May’s deal allows, became the latest and highest profile name to declare he will run. The contest is likely to take months, putting the divorce process once again on hold after May was forced to delay Britain’s departure twice, most recently to Oct. 31.

The default remains a no-deal departure, though the House of Commons has voted to reject such a scenario. It’s also rejected every other option put to a vote, including the deal May painstakingly brokered over two years with the EU.

Without a general election, the math in the chamber remains the same. Nevertheless, May will put her Withdrawal Agreement Bill to a vote in the Commons in the week beginning June 3. The attendee at the meeting Thursday said May couldn’t provide an answer when asked the chances of it passing.

One of May’s biggest detractors within the Tory Party, Mark Francois, told BBC TV on Thursday that sentiment was “hardening” against it.

“It’s definitely going to fail,” Francois said. “She’ll lose that vote, and then I think she will have to step down very quickly thereafter.”

Key Dates as Theresa May’s Premiership Comes to an End

The Tories lost 1,300 councilors in local elections this month, and polls indicate they’re headed for a drubbing in European elections next week, providing more fodder for May’s detractors.

The attendee at Thursday’s meeting said the 1922 Committee executive was divided between those who want to do something to oust May — it’s in the panel’s gift to change rules that currently give May immunity from a confidence vote until December — and those who think nature should be allowed to take its course.

They described the tone of the meeting as polite, but underneath that were stern people giving a serious message to the premier, who at one point was visibly upset. An ally of May pushed back against that characterization, saying she’d been frustrated.

May was accompanied by Chief Whip Julian Smith, Party Chairman Brandon Lewis, and a parliamentary aide, Andrew Bowie. Her chief of staff, Gavin Barwell, was in an ante-room. There were no refreshments or snacks, the person in the room said.

Officials in the opposition Labour Party — which has been in talks with the government for six weeks to seek a compromise — suggested May’s departure will make it even less likely they will agree to a cross-party deal. Labour is worried May’s successor will abandon any promises she makes.

“Every one of the likely candidates is promising to tear up any compromise agreement she might negotiate with Labour,” the party’s trade spokesman, Barry Gardiner, told Bloomberg. “That is hardly the spirit of constructive dialogue that we were promised.”

Read more: The EU Won’t Shed a Tear Over May’s Demise Amid the Brexit Mess