bY DAVID EDWARDS //U.S. Capitol Police reportedly arrested at least 22 people during the first hour of the Senate hearing into the confirmation of Supreme Court nominee’ Brett Kavanaugh.

During what was described as a “raucous” opening, Democrats called on Senate Judiciary Committee Chairman Chuck Grassley (R-IA) to adjourn the hearing because only 10 percent of Kavanaugh’s writings have been made available to committee members.

As Democrats clashed with Grassley, members of the hearing’s gallery stood up to protest against Kavanaugh’s record and against the Republican-controlled process.

According to NBC’s Frank Thorpe V, at least 22 protesters were taken out of the room and placed under arrest in the first hour of the hearing alone.

Capitol Police say that as of now, 17 individuals have been arrested protesting the Kavanaugh confirmation hearing.

Update: Capitol Police now say that as of 10:19 a.m., 22 individuals have been arrested at the Kavanaugh hearing. The preliminary charge is D.C. Code § 22-1321 – Disorderly conduct.

Grassley now says Kavanaugh’s opening statement will be delayed because of the democrats objections this morning. “It’ll probably be later this afternoon now,” Grassley says if Kavanaugh’s Opening Stmt.

“How long you want to go on with this?” – Grassley then asks Dems. 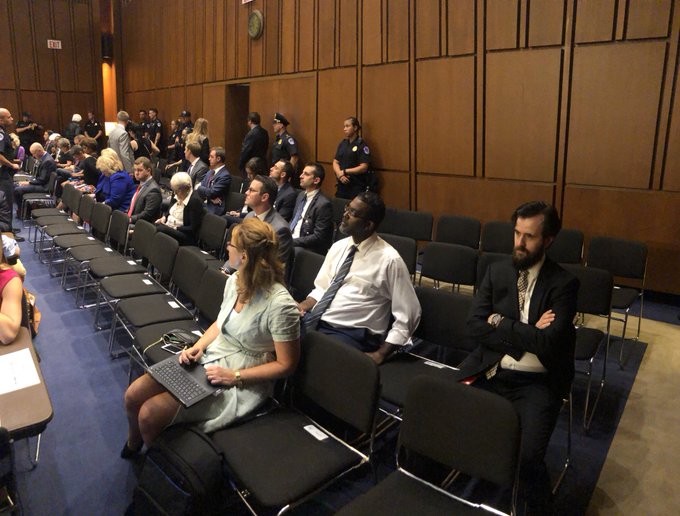 After the arrests at the Kavanaugh Hearing there are plenty of seats open in the hearing room:

After the arrests at the Kavanaugh Hearing there are plenty of seats open in the hearing room:

“I’ve been watching cartoons this morning to get ready for the hearing,” Sen. Lindsey Graham (R-SC) said as he arrived for today’s Kavanaugh hearing.